B'coz I Love You 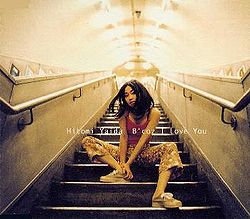 "B'coz I Love You" is the second single (first major label single) released by Yaida Hitomi. This is Hitomi's first release under EMI Music Japan, and is considered her first single. The title track was used as the opening theme song for the TV program CDTV. The single reached #16 on the Oricon weekly charts and stayed on the charts for a total of thirteen weeks, selling 118,000 copies.

There are two versions of B'coz I Love You currently to be found in Yaida Hitomi's discography.

B'coz I Love You (Live)
Found on the Music Pool 2002 album as track #1. This is the standard version, but performed live.