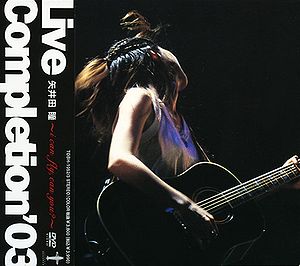 Live Completion ‘03 ~i can fly,can you?~ is the seventh DVD released by Yaida Hitomi. It contains two DVDs: the first one includes live footage from OSAKA/flancy midnight ~countdown live 2002-2003~ and Aki wa Shittorito ~acoustic live 2003~; the second one includes live footage from i/can fly Tour2003. Also comes with behind-the-scenes footage, rehearsal footage, and interview. The DVD reached #12 on the Oricon charts and stayed on the charts for a total of eight weeks.