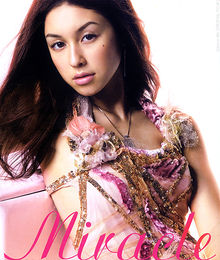 "Miracle" is the fourth single released by Arashiro Beni. This single was released while Arashiro was still a member of the Pony Canyon produced idol group Bishoujo Club 31. It was also released on the same day as her debut self-titled album, Beni, which can somewhat explain the low sales for the single. The titular track was used as an ending theme song for Fuji TV's program Kiseki Taiken! Unbelievable. The single reached #98 on the Oricon weekly charts, where it charted for a week and sold 1,287 copies.