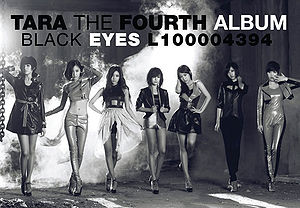 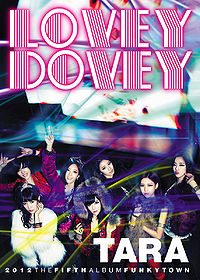 Black Eyes is T-ara's third mini-album. On the cover art is stated that this is their fourth album, as it's their fourth physical release after their first full album and their two first mini-albums (not counting repackaged releases). The song "Cry Cry" was used as lead track, and it's 16minute music video feature actors Cha Seung Won, Ji Chang Wook and Lee Jae Yong. At the end of the music video the song "Lovey-Dovey" can be heard and at that time Core Contents Media announced that it would be their next promotional track, from the repackaged version of the mini-album.

The repackaged mini-album, Funky Town, was released nearly two months later, including the previously announced song "Lovey-Dovey" and the collaboration song with Davichi "Uri Saranghaetjanha". It was also announced that "Lovey Dovey"'s music video (Drama version) would not only be the second part of "Cry Cry", and complete the 30minutes short film, but that there would be five different versions of it, including a zombie themed video or a Tokyo version.