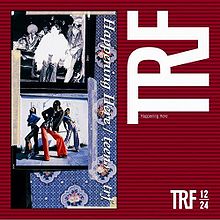 "Happening Here / teens" is the twelfth single released by trf. "Happening Here" was used as the Morinaga Choco Ploc CM song while "teens" was used as the CM song for the same brand's Joy product. The single, along with all the singles released by TRF up to 1999, was reissued in 2006 in a 12cm CD version with a cheaper price, to commemorate TRF's 15th anniversary. Hamasaki Ayumi later covered "teens" as a tribute to TRF's 15th anniversary. The 8cm single was released in the same day as their sixth album BRAND NEW TOMORROW.

The original release of the single reached #3 on the Oricon charts, and charted for ten weeks. As it sold 316,320 copies from 1995 through 1996, it was the 96th best-selling single of 1996. This single showed the drop in trf's popularity.