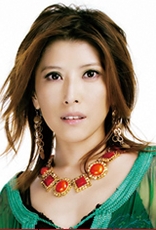 YU-KI is the lead vocalist of the popular Japanese group, TRF.

YU-KI began in 1990 when attended an audition for TV Asahi named DA DA LMD, where she placed 3rd Runner up. After that, she joined the dance group ZOO. She was featured as a main vocal in the first single "Careless Dance" and left the group after the single was released. After quitting the group, YU-KI participated in the Komuro Tetsuya dance contest TK Track Night where she personally met Komuro. Soon after, she joined trf, which was produced by Komuro, as the main vocals.

She released a solo single in 1997 entitled "dragons' dance", which had moderate success. A year later, she begin to experiment and then became the lyricist and songwriter for trf. Then after, she began to perform in Japanese versions of Broadway plays like RENT.