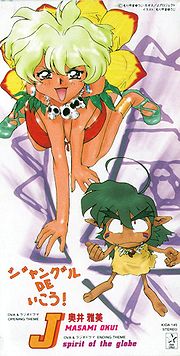 "J" is the 12th single released by Okui Masami. "J" and "spirit of the globe" were used as the opening and ending theme for the OVA Jungle de Ikou!. The single reached #79 on the Oricon charts and charted for two weeks, selling 7,940 copies.