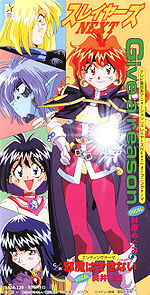 "Give a reason" is the 20th single recorded by Hayashibara Megumi, and the 10th single released by Okui Masami. The single is a split single between the two artists, and their second time working together; with the first being on "Get along". The song was used as the opening theme to the Salyers NEXT anime series. The B-side, Okui's "Jama wa Sasenai" was used as ending theme song to the series. This is Hayashibara's fourth single to have a tie-in to the Slayers series and Okui's second.

The song "Give a reason" has been covered by many anison artists and anime cover albums such as:

The single reached #9 on the weekly Oricon chart, and stayed on the chart for a total of 13 weeks. This is both artists first single to chart within the Oricon's top ten. It sold 232,850 copies in total, and is the second best selling seiyuu single, and the seventh best selling anison single all time.