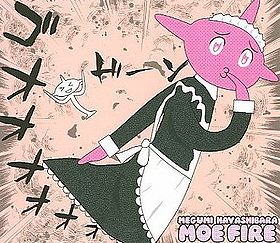 Moe Fire is the first mini-album released by Hayashibara Megumi. It contains songs from her previous albums with a moe feel to them and a new song, "Pura MY Purasu". At first the album was sold only at limited venues, however later it was distributed through online shopping at KINGRECORDS e-SHOP for sale or to download. The album did not chart the Oricon weekly chart.