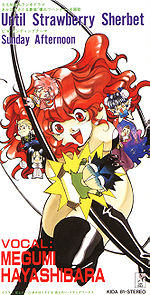 "Until Strawberry Sherbet" is the the twelfth single (seventh major label single) released by Hayashibara Megumi. The title track was used as the opening theme to the Bakuretsu Hunter radio drama. The B-side, "Sunday Afternoon", was used as the drama's ending theme song. The title track was later performed as a duet with Greg Lee and placed on Hayashibara's sixth studio album, Enfleurage (along with the B-side).

The single reached #42 on the Oricon chart and stayed on the chart for a total of two weeks. This single sold 15,320 copies in total.

There are currently three version of "Until Strawberry Sherbet" to be found in Hayashibara Megumi's discography.