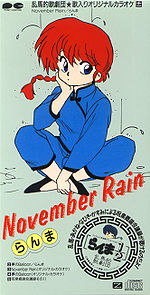 "November Rain" is the third single released by Hayashibara Megumi, and Hayashiabra's second character single. The single is a character single for the female version of Saotome Ranma from Ranma ½, who Hayashibara voiced. The single was released on the same day as whole string of Ranma singles: "Characters' Christmas", "Miwaku no Limbo Dance", "Omoide ga Ippai", and "Otousan".

The single reached #64 on the weekly Oricon chart, and stayed on the charts for a total of one week.