(Redirected from A Happy Life) 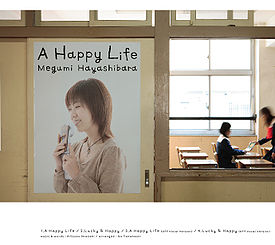 "A Happy Life" is the 47th single released by Hayashibara Megumi. The title track was used as the opening theme song to the anime Gakuen Utopia Manabi Straight!, and the B-side was used as the series' ending theme song. This single was the lead-in for Hayashibara's 12th studio album, "Plain". Both tracks on the single were composed by one fo Hayashibara's long time collaborators, the late Okazaki Ritsuko, whom died in 2004 from septic shock.

The single reached #12 on the Oricon chart, and stayed on the chart for a total of eight weeks. During its first week it sold 11,000 copies, and has since gone on to sell a total of 20,108 copies.