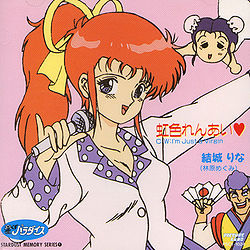 "Nijiro Renai★" is the fifth single (third character single) released by Hayashibara Megumi. The character for the single is Yuuki Rina (結城りな) from the anime OAV Hoshikuzu Paradise (星くずパラダイス). The single was the first released from a series of Hoshikuzu Paradise singles. The song was used as the opening theme to the OAV and is a cover of the original by Miyoko Ai. The single did not chart on the Oricon wekly charts.