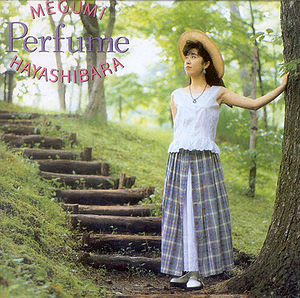 "Perfume" is the third album released by Hayashibara Megumi. The album is Hayashibara's second album released in 1992, five months after "WHATEVER". This album had no singles released leading up to it. On this album Hayashibara started writing lyrics for the first time, contributing to two tracks: "STRAY CAT" and "Growing Up". The song "Watashi ni Happy Birthday" was used as an opening theme to the All Cutural Purpose Cat Girl Nuku Nuku anime OAV. The first press edition comes with a thin case, and a 16 page color photo book.

The album reached #13 on the Oricon chart, and stayed on the chart for a total of three weeks, selling 27,090 copies. The re-release of the album failed to chart on the Oricon.