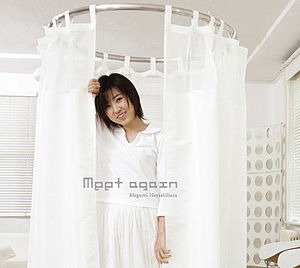 "Meet again" is the 46th single released by Hayashibara Megumi, and it is Hayashibara's first single in almost three years. The single was created to commemorate the 10th anniversery of the Slayers anime. The title track was used to promote the anniversary, and all the other songs on the single have previously been used for Slayers releases. The version of "Get Along' found on here is a solo version, unlike the original, which is a duet with Okui Masami. Track #3 contains a new arrangement, but track #4 is the same song found on her best-selling 1997 single.

The single reached #12 on the Oricon chart, and stayed on the chart for a total of six weeks, selling 24,393 copies. The song also reached #7 on the Komuchatto Countdown.