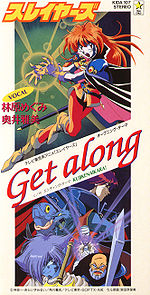 "Get along" is the 16th single (11th major label single) released by Hayashibara Megumi and it is the seventh single released by Okui Masami. The single is a collaboration between Hayashibara and Okui, and it marks the first time that the two artists have worked together. The title track was used as the opening theme song to the Slayers anime series. Track #2, "KUJIKENAIKARA!" was used as the series' ending theme song, which music was written by Okui Masami.

The music video for "Get along" starts out with clips from the Slayers anime. The video soon switches to scenes of Hayashibara and Okui dancing and singing in a dark studio. The rest of the video is made of scenes switching back and forth from the anime and seiyuu.

There are currently three different versions of Get along to be found in Hayashibara Megumi and Okui Masami's discographies.

Get along
This is the original version of the song which is a collaboration between Hayashibara and Okui. It is first found on the "Get along" single as track #1. The song is later found on Okui Masami's best of album, S-mode #1 as track #12. This is the version which is set to the music video.

Get along (Off Vocal Version)
Found on the "Get along" single as track #3. This is the original version of the song, except without the vocals.

Get along ~SelfTag Version~
Found on Hayashibara's "Meet again" as track #2. The song is later found on the Slayers MEGUMIX as track #1. This is a solo version of the song recorded by Hayashibara.