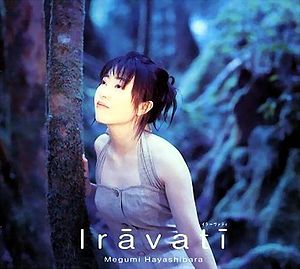 Irāvatī is the eighth studio album released by Hayashibara Megumi. The album title comes from a charcter from Indian mythology with the same name, whom is assiociated with the sacred river. Irāvatī is also the Sanskrit word for Refreshment. The photoshoot for the album took place deep within a forest around a river, most likely an allusion to the Indian character. The first press edition of the album came with a 40 page photobook and a deluxe cardboard case for the CD case and photobook.

For the album, Hayashibara recorded two covers. The songs "Tamashii no Refrain (Aqua Groove Mix)" and "Kokoro Yo Genshi ni Modore (Naked Flower Version)" are both covers of songs recorded by Takahashi Yoko, which were both used in the Shin Seiki Evangelion anime series.

The album reached #5 on the weekly Oricon chart, and stayed on the chart for a total of eight weeks. Within the first three weeks the album selling 277,060 copies, making it Hayashibara's best selling album. The re-release of the album failed to chart on the Oricon. This is also the best selling album released by a seiyuu.