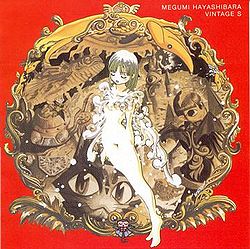 VINTAGE S is the first best of album released by Hayashibara Megumi. This is the first of two best-of album released by Hayashibara, with the second album, VINTAGE A being released two months later. The majority of the album is made up of singles, along with a couple b-sides ("Oyasumi Nasai Ashita wa Ohayou", "Lively Motion", "~Sorekara~", and "Touch Yourself"). The first press edition of the album came with the VHS Tobuketsu Hayashibara Megumi O'Takara Video. The cover of the album was drawn by manga-ka Takada Yuzo, whom Hayashibara has a voiced a character for in each of his animes.