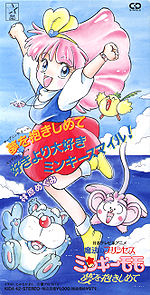 "Yume wo Dakishimete" is the sixth single (second major label single) released by Hayashibara Megumi, and it is her fourth character single. The title track was used as the opening theme song to the Mahou no Princess Minky Momo anime, where she voiced the main character, Minky Momo. Both songs on the single were composed by Okazaki Ritsuko, and this marks the first time Hayashibara has worked with the singer-songwriter. The songs are later found on Hayashibara's Minky Momo character album, Minky Momo Love Stage and on her fourth studio album SHAMROCK.

The single reached #90 on the weekly Oricon chart, and only stayed on the chart for one week, selling 2,550 copies.