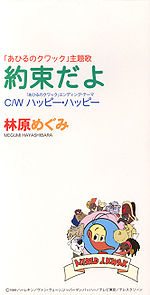 "Yakusoku da yo" is the debut single released by Hayashibara Megumi. The single is a character single for the Alfred J. Kwack from the anime of the same name. The song title track was used as the opening theme to the anime series, while the b-side "Happy Happy" was used as the series ending theme song. These songs were only appeared on Hayashibara Megumi's discography in 2015 on her best album: Time Capsule.

In 1997, at the peak of Hayashibara's career the single was re-released. This version of the single reached #51 on the Oricon charts and stayed on the charts for a total of two weeks, selling 13,800 copies.