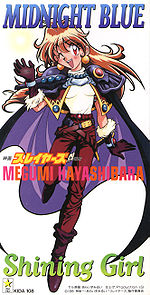 "MIDNIGHT BLUE" is the 17th single (12th major label single) released by Hayashibara Megumi. The title track was used as theme song to Slayers: The Motion Picture. The B-side, "Shining Girl" was used as the movies ending theme song. This is Hayashibara's second single to be released with a tie in to the Slayers series.

The single reached #27 on the Oricon chart and stayed on the chart for a total of seven weeks. This single was a real turning point in Hayashibara's career, marking it to be her first single to enter the top 30. It sold 71,550 copies in total.