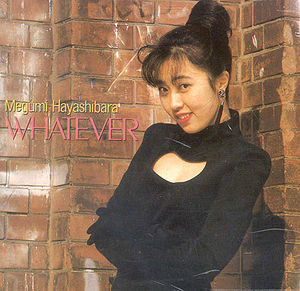 WHATEVER is the second album released by Hayashibara Megumi. The album was released exactly a year after her debut major label single, "Nijiiro no Sneaker", which is featured on the album (as well as on her first album). Unlike on her first album, all of the tracks found on WHATEVER had various tie-ins. The album also features the first song recorded by Hayashibara, "Yoake no Shooting Star", which was used in the 1988 anime Mobile Suit Gundam 0080: War in My Pocket. The first press edition of the album came with a large box and a 40 page photo booklet, with a mixture of color and black and white photos.

On 2005.03.16, a limited edition re-release was issued along with all of Hayashibara's other albums up through the VINTAGE albums. This version of the album featured all the tracks remastered and a 42 page photo booklet, all of which was located inside a special box.