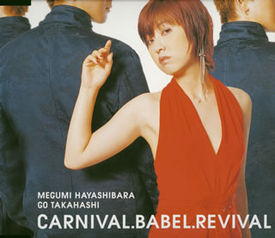 "CARNIVAL・BABEL・REVIVAL" is the 44th single released by Hayashibara Megumi. The single is one of two special single released on the same day, with the other being "Makenaide, Makenaide...". The title track is a cover of TAKADA BAND's "CARNIVAL BABEL", which was used as the opening theme to the 1994 anime Blue Seed where Hayashibara voiced the main character, Fujimiya Momiji. The song is also a duet between Hayashibara and her regualr composer and arranger Takahashi Go. The single was released to help promote the release of the 3x3 Eyes DVD Boxset (another series by Blue Seed author, Takada Yuzo).

The single reached #9 on the Oricon chart, and stayed on the chart for a total of eight weeks.