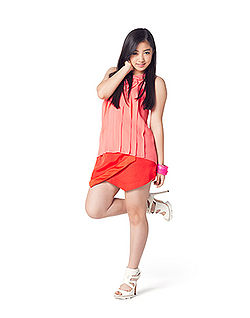 Nakajima Momoka (中嶋桃花) is a trainee of Japanese girl group E-girls. She joined the group in 2013, replacing Kizu Reina, who had left the group to pursue modelling. Before joining E-girls, she previously appeared in their music videos of "THE NEVER ENDING STORY ~Kimi ni Himitsu wo Oshieyou~" and the dance intro of "CANDY SMILE".