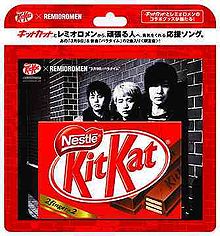 "3gatsu 9ka / Paradigm" (Sangatsu Kokonoka / Paradigm) is a special single released by Remioromen in collaboration with Nestlé. It was released under breaktown LABEL. The single was coupled with a Kit Kat bar, and it was sold in convenience stores as well as music stores. It featured one new song, "Paradigm", that is not on any other Remioromen release. Both songs on the single were used as Kit Kat CM songs. The release was limited to 500,000 copies, and an estimated 350,000 sold in the first week.[1] It did not chart on the Oricon weekly chart because it was sold in places besides regular music stores.