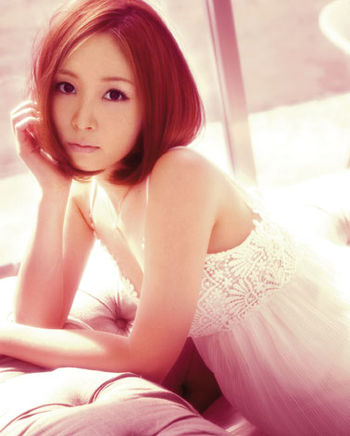 Aiuchi Rina (愛内里菜) is a former Japanese pop artist who was under the GIZA studio label. When she debuted, her music was a mix of trance, dance, and pop; however, after she started self-producing her songs, Aiuchi incorporated rock influences in her music. Despite her minor setbacks, she remained a prominent name in the Japanese music scene and is one of GIZA's most popular artists. In 2010, Aiuchi announced that she was retiring from music because of health reasons.

In August 2013, she legally changed her name to Rika Kakiuchi (垣内りか). She later explained via her blog that she did so because of, among other reasons, her desire to separate her identity as a former singer from her post-retirement work as a producer of her "BonBon Copine" brand of pet-related items and services. 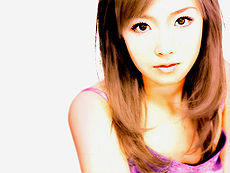 Aiuchi Rina has always enjoyed singing and her ability to play piano had made her the class pianist during her elementary school years. Before her debut, she modelled for the magazine Cawaii! in a short period of time.

In 1999, Aiuchi was the winner of the "SUPER STARLIGHT CONTEST" held by GIZA studio and got a contract. She made her musical debut in 2000 with the single Close To Your Heart at the age of 19. It became a club hit. Her fourth single Koi wa Thrill, Shock, Suspense was used as the opening theme for the anime Meitantei Conan, in which the characters danced parapara to the music. This single was also her first time breaking the Oricon top 10, as the song reached #5. Months later, her first album Be Happy was released; it reached #3 on the Oricon and sold over 325,000 copies.

In October 2001, Aiuchi released the pop ballad NAVY BLUE. This single reached #2 on the Oricon and is currently her highest selling single, at 128,000 copies. When she released I can't stop my love for you♥, it was made the opening theme for Meitantei Conan once more and hit the Oricon at #2 again.

Aiuchi's next album, POWER OF WORDS, became her highest selling record to date and reached #1 on the Oricon. Its sales totaled over 419,000 copies. She also began her national tour "Rina Aiuchi Live Tour 2002 'POWER OF WORDS'" and had eight performances.

2003 was a big year for Aiuchi Rina. When FULL JUMP was released, it became the theme song of Nippon Television's baseball broadcasts. She also appeared as a guest for the Yomiuri Giants vs. Yokohama BayStars game, but admitted to being a Hanshin Tigers fan instead. The same year, the "Rina♥Matsuri" concert was held on July 31st in Osaka as a special performance for her birthday. Guests included fellow GIZA artists U-ka saegusa, Uehara Azumi, Shizukusa Yumi and Utoku Keiko. 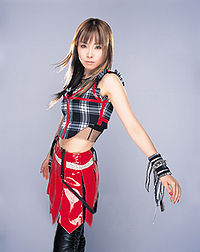 On October 15th, 2003 Aiuchi released three things: her third album, 15th single, and second photobook "made in RINA 2003". Like her previous album, A.I.R also reached #1 on the Oricon; however, the sales for her third album were far less, around 183,000 copies. Aiuchi also had her national tour "Rina Aiuchi Live Tour 2003 'A.I.R'", but performed only four times. In December, her Single Collection was released and she performed for the first time at the 54th Kouhaku Utagassen, singing FULL JUMP.

Dream x Dream was released the following year in April and was used as the theme for the Meitantei Conan movie Ginyoku no Magician, making it her first movie tie-in. Again in 2004, "Rina♥Matsuri 2004" was held on her birthday and August 3rd with guests U-ka saegusa, Kitahara Aiko, Shizukusa Yumi and Kishimoto Hayami. After two more singles, START and Boom-Boom-Boom, her fourth album PLAYGIRL was released and charted at #7 on the Oricon, selling roughly 106,000 copies.

In July 2005, Aiuchi performed at the Animelo Summer Live 2005 -THE BRIDGE- with several other artists performing anime themes. She sang I can't stop my love for you♥ and Koi wa Thrill, Shock, Suspense, both used in Meitantei Conan. She did a collaboration with Tsunku in his Type2 album, entitled Ai Epilogue. Then, "Rina♥Matsuri 2005" was held with guests U-ka saegusa IN db, OOM, Kamiki Aya and the★tambourines. When the single ORANGE★NIGHT was released, it was all but annihilated by Shuuji to Akira's Seishun Amigo, only charting at #12.

In March 2006, her 21st single, a double a-side entitled GLORIOUS / PRECIOUS PLACE was released. Both songs were featured in the PlayStation 2 game Another Century's Episode 2, as opening and ending themes respectively. It charted at #5 on the Oricon. She released one more single, MIRACLE, before her fifth album DELIGHT was released. The album reached #4 and sold barely more than 50,000 copies. Then she had her national tour "RINA AIUCHI LIVE TOUR 2006 'DELIGHT'".

In June 2006, Aiuchi teamed up with fellow GIZA artist and friend U-ka saegusa to release a collaboration single, 100 Mono Tobira. The song was used as opening theme for Meitantei Conan and charted at #8. In the next month, she took part in the concert Animelo Summer Live 2006 -OUTRIDE-, held in Nippon Budoukan. She performed 100 Mono Tobira (with U-ka saegusa), GLORIOUS and MIRACLE -Allegro. vivacemix-. In the same month she had her own concert "Rina♥Matsuri 2006". The guests this time around were Takei Shiori, Kamiki Aya, Sparkling☆Point, U-ka saegusa and Kitahara Aiko. Aiuchi was also featured in the special unit Nagisa no All Stars, created by TUBE and Oda Tetsuro. They released the single Taiyou no Take Off / Kimi wa Boku no Aozora in August 23rd, 2006. Aiuchi shared the vocals with Nagase Miyu and Aran Tomoko on the second track. 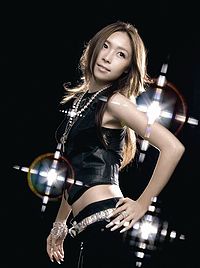 2007 started with the single Bara ga Saku Bara ga Chiru being released in January 1st. In the next month, Aiuchi perfomed two days of the concert "RINA AIUCHI VALENTINE LIVE 2007", which was later released as a DVD. A second collaboration single with U-ka saegusa was planned, named Nanatsu no Umi wo Wataru Kaze no You ni. It was used as the theme song for the Meitantei Conan movie Konpeki no Jolly Roger, and did slightly better than their previous single, charting at #6. Her annual birthday concert "Rina♥Matsuri 2007" was held, but unlike the others, it wasn't released as a DVD. Aiuchi released Mint in August and the double a-side Nemurenu Yo ni / PARTY TIME PARTY UP in December.

The following year saw the release of her ballad single, I believe you ~Ai no Hana~, in May. Two weeks later her sixth album, TRIP, was out. The album reached #10, and is her lowest ranking for albums yet, with 29,000 copies sold. The "Rina♥Matsuri 2008" took place in Zepp OSAKA in July 26th. In August 30th, a special live was produced by Yomiuri TV, entitled "Meitantei Conan Natsu Matsuri ~Yume no Hatsu Live~". The performers were Kuraki Mai, Aiuchi Rina (with guest U-ka saegusa) and Kamiki Aya.

In October 15th, Aiuchi made a double release, her 27th single Kimi to no Deai ~good bye my days~ and the DVD PREMIER SHOT #4 VISUAL COLLECTION. They were followed by another double a-side single, Friend / Sugao no Mama, in December.

2009 marked her 10th Anniversary in the industry. After the single Ai no Kotoba, Aiuchi released her seventh album, THANX, in March 25th, and ranked #7 on the Oricon. The DVD included in the limited edition type A contained her performance from "Rina♥Matsuri 2008". A special site was launched with messages from Aiuchi, self-liner notes, and a section to vote for songs to be performed at "Rina♥Matsuri 2009".

On July 22nd, Aiuchi released her 30th single STORY / SUMMER LIGHT and her 31st single, MAGIC on October 21st. Both singles were released to promote her 2nd best of album, ALL SINGLES BEST ~THANX 10th ANNIVERSARY~ which contained all of her A-sides since her debut single and a new song, GIFT. It was released on December 16th and ranked #7 on Oricon.

Aiuchi than began 2010 with another best-of album, COLORS which contained B-sides and album tracks that had to deal with colors (most of Aiuchi's B-sides were based off colors in the first place). This was released on March 24th and ranked #48 on Oricon.

A month shortly after her last best-of album, Aiuchi than began to release a trilogy of digital singles: GOOD DAYS, Sing a Song, and C・LOVE・R .

After the release of the digital singles, she announced her 32nd single, HANABI. Unfortunately, on the week the single was released, Aiuchi announced that she would be retiring from music because of her health problems and to "reset mentally and physically". She also announced final performances and her final album, LAST SCENE, due out on September 15th.

In 2015, she had a little comeback in a karaoke tv show singing 2 songs.

In December 2017, she revealed in another tv show, that she’s a single mother.

In April 2018, she released a new digital single, WARM PRAYER, under the moniker R. She's doing crowdfundings for her singles and the Album Ring, which was released on the day of her 20th Anniversary and the same day as her debut single Close To Your Heart. 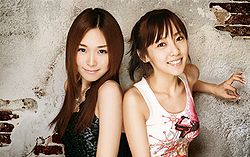 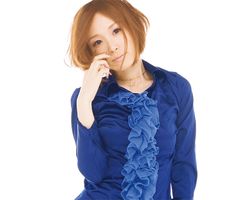