Song for You (MISIA) 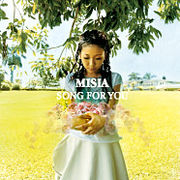 "SONG FOR YOU" is the first digital single released by MISIA. The song was written specially for her THE SINGER SHOW THE TOUR OF MISIA 2005 and was released as a digital on the same day as the DVD release for the tour. On August 22nd, 2007, a live version of the song performed at a Hoshizora no Live IV concert in Niigata was digitally released as her third digital single and a portion of the proceeds were donated to relief efforts for the 2007 Chūetsu offshore earthquake.