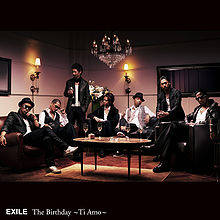 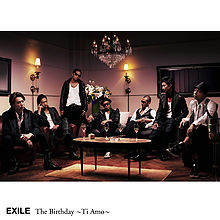 "The Birthday ~Ti Amo~" is the 28th single released by EXILE. It was released in two editions, CD+DVD and CD Only. First presses for both editions come housed in a sleeve cover and include a poster. The single was released exactly seven years after their debut. The title track become the winner of the 50th Japan Record Awards, and it was used as CM theme song for Meiji Meltykiss. The song "SUPER SHINE" is a new version featuring VERBAL, of the original previously included on the best album EXILE ENTERTAINMENT BEST, released two months earlier. "24karats" is a new version of "24karats -type S-" and/or "24karats -type EX-", replacing Sowelu with Nidaime J Soul Brothers. The song "Your Eyes Only ~Aimai na Boku no Katachi~" is a re-recorded version of their debut single. The single sold 303,936 copies in 2008 becoming the #17 single of the year.