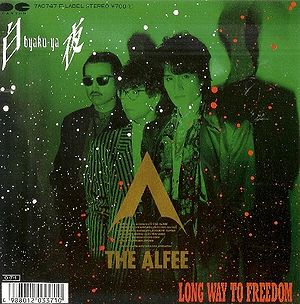 "byaku-ya" is the 27th single released by THE ALFEE. It was initially released as an EP record and a cassette tape, then later as an 8cm CD. The single reached #3 on the Oricon weekly chart and charted for twelve weeks, selling approximately 124,000 copies. It was not included on a studio album.

An English eurobeat cover called "CRIMSON KISS ~byakuya~" was sung by DAVE RODGERS on the album the ALFEE MEETS dance. It was also self-covered by Takamizawa Toshihiko as "Byaku-ya ~Metal Byaku-ya~" on version B of his single "Tsukihime"