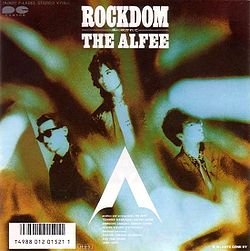 "ROCKDOM -Kaze ni Fukarete-" is the 24th single released by THE ALFEE. It was initially released as an EP record, then later as an 8cm CD. The single reached #4 on the Oricon weekly chart and charted for eight weeks, selling approximately 124,000 copies.

A Korean cover called "First Love, That Kid" was sung by Lee Soo Young on the mini-album Once.