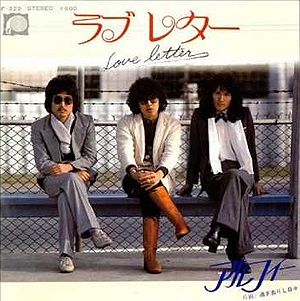 "Love Letter" is the third single released by ALFEE and both their first with Canyon Records and first under their new name. It was initially released as a vinyl record, followed by a vinyl reissue in 1984, and an 8cm CD in 1988. The song was used as SHOWA NOTE's 1979 commercial image song. The single did not rank on the weekly Oricon chart.