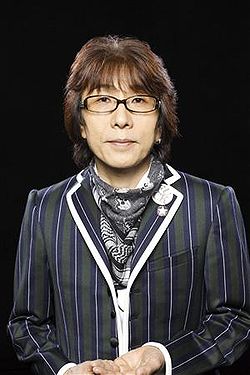 Sakazaki Kohnosuke (坂崎幸之助) is a Japanese folk singer and multi-instrumentalist. He is best known as a member of the rock band THE ALFEE.

Sakazaki was introduced to The Beatles by his older brother in his fourth year of elementary school.[1] Heavily influenced by them, he was inspired to buy his first acoustic guitar in middle school, a Yamaha FG-110. Later, Sakazaki developed a liking for Japanese folk acts such as The Folk Crusaders and Yoshida Takuro. He started covering songs and participated in folk contests. In the summer of 1972, he met Sakurai Masaru and his cover band Confidence. Together, they performed an original song and won third place.[2] Soon, he joined the band as lead guitar.

In 1973, Sakazaki and Sakurai were accepted to Meiji Gakuin University. There, they met Takamizawa Toshihiko who also joined the band. In 1974, Confidence signed to Victor Music Industries as ALFIE with Sakazaki as the leader. In 1982, he passed the title to Takamizawa as they switched genres to rock.

In 2002, the 1960s band The Folk Crusaders reunited for a limited time with Sakazaki, a big fan, joining as a special member. They held a concert on November 17th at NHK Hall and released a studio album, a live album, and a single.

In March 2007, Sakazaki announced on his radio program K's TRANSMISSION that he would form a folk duo called Kazukoh with Kato Kazuhiko of The Folk Crusaders and Sadistic Mika Band. The group's name is a combination of the first kanji in both of their first names. Together, they released two albums before Kato's death in October 2009.[3]