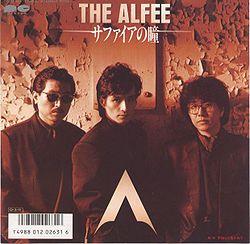 "Sapphire no Hitomi" is the 25th single released by THE ALFEE. It was initially released as an EP record and a cassette tape, then later as an 8cm CD. The single was released simultaneously with their 26th single, "Kimi ga Toorisugita Ato ni -DON'T PASS ME BY-". The title track was used as Lion's 1987 "Page One" CM song, and the B-side, "Kogarashi ni Dakarete...", is a self-cover of Koizumi Kyoko's song of the same name. The single reached #1 on the Oricon weekly chart and charted for twelve weeks, selling approximately 187,000 copies. It was the #31 best-selling single of 1987, and it was not included on a studio album.