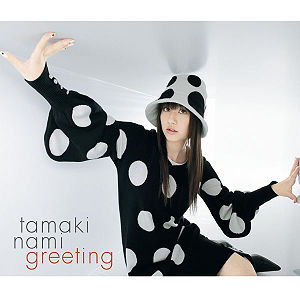 "greeting" is the debut album released by Tamaki Nami. This was released in two different versions: a limited CD+DVD edition and a regular CD only edition. The limited edition comes with a DVD of two live performances from the Mobile Suit Gundam SEED festival at the Kokuritsu Yoyogi Kyougi-jo on December 27th, 2003. This edition also comes in special three sided box casing and a 44 page photobook. The album was then released in four more regions; two weeks later in Taiwan and Hong Kong, and two months later in the U.S.A. and Korea. Those overseas releases were only the regular CD only edition. The Korean release came with a slipcase and three postcards. The DVD counterpart to this album was released about three months later as "greeting DVD". The album reached #5 on the Oricon chart, where it charted for 14 weeks, selling 143,850 copies.