The Point of Lovers' Night 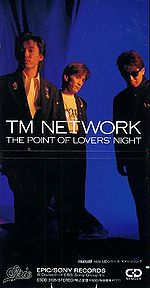 "THE POINT OF LOVERS' NIGHT" is TM NETWORK's 21st single. This is also the band's last single under the "TM NETWORK" name until 1999. From this single's release and on, the band only released their singles in the 8cm CD format.

The title track was used as a theme song for the Maxwell Cassette Tape UD@017 commercials. Komuro stated in an interview that the band wanted a hard rock sound for this single. They asked Duran Duran guitarist at the time Warren Cuccurullo to participate. The band made used synclaviers instead of drums for the title track. [1]