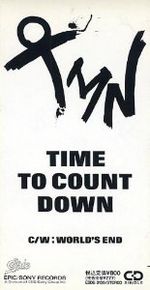 "TIME TO COUNTDOWN" is TMN's, formally TM NETWORK, 22nd single. This is also the band's first single under the "TMN" name. The theme of the single is "Nervousness of the Countdown till the End of the 20th Century".[1] The title track was used as a theme song for the Maxwell Cassette Tape UD@017 commercials. For the title track, the band used a double bass drum and a distortion guitar played by Nile Rodgers' bandmate Brad Gillis. [1]