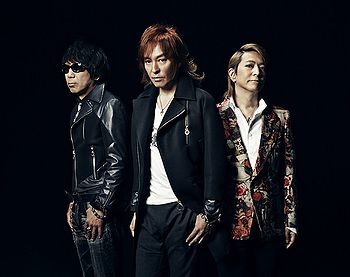 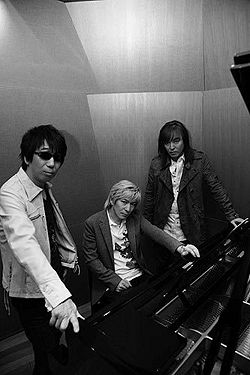 The Beginning and Success: 1980s

TM Network started in 1983 when Komuro, Utsunomiya, and Kine got together after the break up of SPEEDWAY. The band performed a self-written song, "1974", at the 1983 Fresh Sounds Contest, receiving the grand prix award after getting perfect scores. They signed on Epic Records and released their first single, "Kinyoubi no Lion (Take it to the Lucky)", and first album, RAINBOW RAINBOW, on the same day in 1984 with the slogan "Kiniro no Yume wo Misete Ageru" (金色の夢を見せてあげる; I Show You a Golden Dream). Two months later, the group performed their first concert tour, DEBUT CONCERT.

In February 1986, TM Network performed as special guest on the TBS special ANNIVERSARY ROCK FESTIVAL. In June, the group went on their fourth live tour, TM NETWORK TOUR '86 FANKS DYNA☆MIX, while releasing their third album, GORILLA, with impressive results as the album was the group's first to be in Oricon's Top 20. Their fourth album, released the following year, had much better results for the group as it hit the top ten.

TM Network released their tenth single, the anime City Hunters' theme song "Get Wild", on April 1987. The single became the group's first top ten single and one of their signature songs as it reached #9 on the weekly Oricon charts. The song has been coveed by many artists since it's released like Tamaiki Nami and Komuro Tetsuya's own group globe. Three months later, they released their first best album, Gift for Fanks. They also released their fifth album, humansystem, by the end of 1987, becoming the group's first #1 album.

In 1988, the group released their sixth and best selling album to date, CAROL ~A DAY IN A GIRL'S LIFE 1991~. The album went to double plantium as it reached #1 on the weekly Oricon charts. The album also spawned a tour sponsored by Coca-Cola and an 1990 orginal video animation that featured the members in it. By end of the year, the group appeared on the special program Kouhaku Uta Gassen for the first time, singing the song "COME ON EVERYBODY". Also, the group released their first remix album, DRESS, a year later in 1989.

To kick off the beginning of a new dace, TM Network would released their 21st single, "THE POINT OF LOVERS' NIGHT", becoming another #1 hit for the group. But by September 1990, the band changed their name from TM Network to TMN as they released the single "TIME TO COUNTDOWN". They also released their seventh album, RHYTHM RED, under this name but didn't affected their sales as the album went #1.

The group went onto play at a special event in 1991, entitled EPIC SONY TMN SPECIAL EVENT. They also released their 25th single, "Love Train / We love the EARTH" and 8th album, EXPO, becoming another #1 hit for the group. They also released their first two live albums, TMN COLOSSEUM I and TMN COLOSSEUM II, in 1992 with much success as the two albums claimed the #1 and #2 spots on the charts.

In 1993, the group released two more remix albums, TMN CLASSIX 1 and TMN CLASSIX 1I. The group also were special guests and also performed at the Act Against AIDS '93. But by 1994, TMN announced they were breaking up. They would release their final single, "Nights of The Knife", as their last #1 single for a while and perform their final two-day concert tour, TMN 4001 DAYS GROOVE, before they broke up in May. To commemorate their last live, the group released two final live albums in August 1994, TMN Final Live Last Groove 5.18 and TMN Final Live Last Groove 5.19. Komuro would go on to become one the best producers of the 1990s while Utsunomiya and Kine would go on with their solo careers and be in various units.

In 1997, Komuro, Utsunomiya, and Kine agreed and accepted a reformation of the group, announcing it live on a episode of the radio show All Night Nippon. They would make their first appearance together once again in 1999 at the Komuro Tetsuya live event TRUE KiSS DESTiNATiON Night as TM NETWORK. They released their first single back together, a new version of their hit song Get Wild, in 1999 under Komuro's own label, TRUE KiSS DiSC.

The group went on their first live tour, entitled TM NETWORK Log-on to 21st Century supported by ROJAM.COM, at the start of the new millennium. They also appeared and performed at the charity event Act Against AIDS 2000's THE VARIETY 8 and at Komuro's own event, Rendez-vous in Space 2001. Before the year was up, the group released their ninth album, Major Turn-Round, on the indies label Rojam Entertainment.

At the beginning of 2002, the group changed labels once again to gaball screen as they released their 35th single, "[[Castle in the Clouds|CASTLE IN THE CLOUDS]"]. A year later, they released the best album The Legend and a major label version of their 2000 indies album, entitled Kiwokuto Kiroku ~Major Turn-Round. Before the year was up, the group went onto to play at various events, including three concert tours and an Act Against AIDS 2003 event.

TM Network didn't stop in 2004 when they celebrated their twenty year anniversary by releasing their tenth album, NetworkTM -Easy Listening-, and their first box set, entitled WORLD HERITAGE DOUBLE-DECADE COMPLETE BOX. They also celebrated by holding the TM NETWORK DOUBLE-DECADE TOUR “NETWORK” tour with the final performance at the Nippon Budokan. Three years later, Epic Records would announced that they were going to remaster all of TM Network's original albums. With this announcement, the group went ahead and released their 11th album, SPEEDWAY, dedicated the band SPEEDWAY.

The band celebrated their 30th anniversary in 2014 by released two new albums, a single, and holding a nation-wide tour. They also started to reappear on various music programs like Boku no Ongaku and LIVE MONSTER. They also appeared in their first countdown music festival, "ROKIN'ON PRESENTS COUNTDOWN JAPAN 14/15", by the end of the year.

On January 17, 2015, the movie TM NETWORK THE MOVIE 1984〜 30th ANNIVERSARY, documenting and featuring live performances from the past 30 years, was released in twenty theaters across Japan.