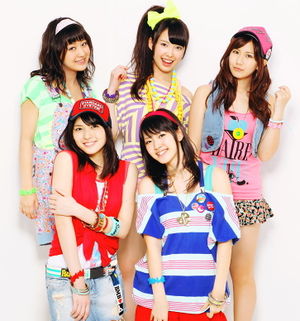 °C-ute is a Japanese pop girl group managed by Up-Front Agency and part of Hello! Project. Their formation was officially announced by Tsunku on June 11, 2005 and would consist of the seven members of the Hello! Project Kids who were not part of Berryz Koubou. In January 2006, Arihara Kanna, a Hello! Pro Egg, was added to the group and made her debut during Hello! Project's 2006 Winter concert tour. For the rest of 2006, °C-ute appeared in several concerts performing original songs which were sold as indie singles. On October 31, 2006, Murakami Megumi suddenly resigned from °C-ute and from Hello! Project; the official reason stating that she wanted to continue her education and lead a private life. The group made their major debut in February 2007 with the single, "Sakura Chirari".

°C-ute had a weekly thirty minute radio show called Cutie Party. It began on October 7, 2006 and aired on FM FUJI every Saturday from 23:00 to 23:30 as the opening portion of Hello! Project Night. In 2008, it was replaced with Cutie☆Paradise. Like Morning Musume before them, at their debut concert each of the group's members were given a color used for merchandise, costumes, and the like. Those colors: Umeda Erika - yellow; Yajima Maimi - pink; Nakajima Saki - orange; Suzuki Airi - green; Okai Chisato - blue; Hagiwara Mai - purple; and Arihara Kanna - red.

In recent months, °C-ute has received various awards, nominations, and also underwent a change in members. Original members Umeda Erika and Arihara Kanna would retire for various reasons. Despite these changes, the group continues their success, recently releasing their 22nd single, Sekaiichi HAPPY na Onna no Ko on September 7, 2011. The single debuted on Oricon Charts at #5.