Do the Best "Great Supporters Collection" 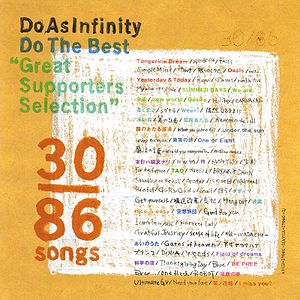 Do The Best "Great Supporters Selection" is a fan-selected collection selected through an online poll held by avex trax on Do As Infinity's official site after its disbanding. It was released among five other different Do As Infinity items on the same day. Fans were allowed to pick 10 songs and a choice to leave comments, many fans from overseas also took part in the process, but only 3 comments from overseas fans were selected to be printed into the book, one from Canada, United States, and also Taiwan. All the names of the voters were printed in the book however. This 2-disc album comprised of the 30 songs out of the 86 total Do As Infinity songs (not including any remixes or new arrangement mixes), surprisingly, not all of the band's A-sides were included in the album. The cover of the album lists the titles of the 86 songs that Do As Infinity has written so far in no particular order. There are no pictures of Do As Infinity included in the album at all. The album reached #26 on the Oricon weekly charts and charted for 2 weeks, selling 16,000 copies.