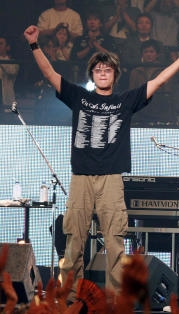 Nagao Dai on stage with band mates of Do As Infinity.

Nagao Dai (長尾大) is a composer, guitarist, music producer, and the founding member of the band Do As Infinity.

Before Do As Infinity, Nagao Dai was hired by the Avex label as a composer and given tasks to compose songs for Hamasaki Ayumi and hitomi. Avex then gave him a chance to make a dream come true and start his own group. Auditions were held in 1999 and he chose Van Tomiko as lead singer and Owatari Ryo as guitarist. The group is named after the letters of his first name.

On September 29th 1999, the trio released their first single "Tangerine Dream" and held a live concert at the Shibuya.

Aside from the occasional concert appearance, Nagao no longer participates in promotional events such as video clips or photo shoots for the group. However, he remained the main composer and the brain behind the band until its breakup in 2005. As of their 2008 reunion, he is no longer part of the group. Instead, he seems to be focusing on his new group, Aria Asia, and his Area404 record label. On occasion, he still composes songs for Avex artists, in particular Hamasaki Ayumi.

(Not including compositions for Do As Infinity and Amasia Landscape.)