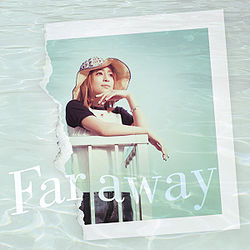 Far away was released as part of Hamasaki's 2000 single trilogy, and was preceded by vogue and followed by SEASONS. Hamasaki has said that the singles are looking at her life from three different angles. The cover art for vogue is a close-up of Hamasaki's face. The cover of Far away has zoomed out to reveal the photo of Hamasaki standing on a deck, next to someone else who has been torn off the photo. The cover of SEASONS shows Hamasaki, by the ocean, holding that half of the torn photo.

The music video for Far away was directed by Takeishi Wataru. It's the second part of the "vogue/Far away/SEASONS" trilogy PV. The Far away part shows Hamasaki exiting the drawing, and singing against the backdrop of the post-apocalyptic world introduced in vogue.