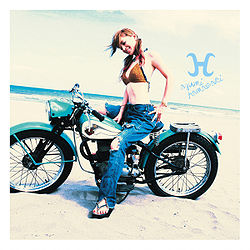 H is Hamasaki Ayumi's 27th single. There are five variations of this single: white, pink, blue, green and a re-released edition that comes in a digipack limited edition with the four covers and gold disc. independent was used as the image song for Nippon Television Network's "THE BASEBALL 2002", July 1st was used in a KOSÉ VISEÉ commercials promoting cosmetics, and HANABI was used by TU-KA in a commercial for promoting "funstyle" model cellphones. This single reached #1 on the Oricon charts and sold 1,000,260 copies in 2002, becoming the #1 single of the year. It charted for 25 weeks and sold a total of 1,012,544 copies.

The song HANABI was certified Gold by RIAJ on January 2015 for selling over 100,000 legal downloads.