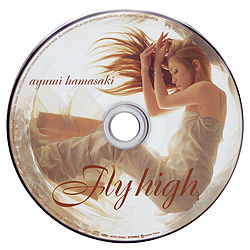 Fly high is Hamasaki Ayumi's 13th single. Fly high was used as the LYCOS CM song. It's the second re-cut single from Hamasaki's LOVEppears album, and was limited to 300,000 copies. It features a neon pink case and a translucent lyric insert. This single reached #3 on the Oricon charts and charted for four weeks. It sold 299,540 copies, becoming the #89 single of 2000.

"Fly high" is a vinyl released by Hamasaki Ayumi. 'Boys & Girls', 'appears/immature' and 'Fly high' vinyls are official and were produced as collector's items that were available only at the shows during the Concert Tour 2000. They are relatively rare but do occassionally appear on e-bay. 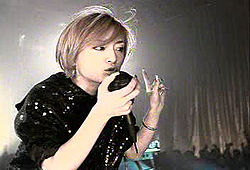 The music video for Fly high was directed by Takeishi Wataru. It is one of many videos showing two Hamasaki Ayumi - in this case, one is performing on stage, and the other is quietly watching from the crowd.