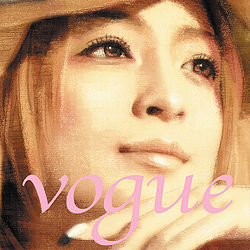 "vogue" is Hamasaki Ayumi's 14th single. vogue was used as the KOSÉ "VISÉE" CM song. ever free was an insert song for the dorama Tenki Yohou no Koibito. This single reached #3 on the Oricon charts and charted for 17 weeks. It sold 767,660 copies, becoming the #23 single of 2000. It was certified double Platinum by RIAJ for shipment of 800,000 copies.

vogue was released as part of Hamasaki's 2000 single trilogy, and was followed by Far away and SEASONS. Hamasaki has said that the singles are looking at her life from three different angles. The cover art for vogue is a close-up of Hamasaki's face. The cover of Far away has zoomed out to reveal the photo of Hamasaki standing on a deck, next to someone else who has been torn off the photo. The cover of SEASONS shows Hamasaki, by the ocean, holding that half of the torn photo.

The music video for vogue was directed by Takeishi Wataru. It's the first part of the "vogue/Far away/SEASONS" trilogy PV. The vogue part shows two children in a post-apocalyptic world finding a sketchbook buried underground. The sketches show Hamasaki singing the song. 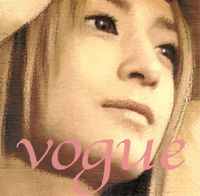