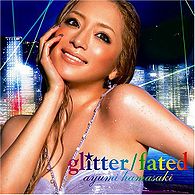 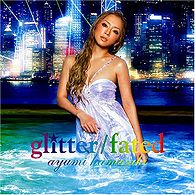 glitter / fated is Hamasaki Ayumi's 41st single. glitter was used as the Zespri "Gold Kiwi" CM song, while fated is the theme song for the movie Kaidan, starring Onoe Kikunosuke and Kuroki Hitomi. The song Secret from Hamasaki's previous album Secret is also included on the single as it is the Chinese movie Confession of Pain's Japanese release theme song. In her official site this single was called the starting of her third chapter. The DVD side of the single contains her second mini movie that was shot in Hong Kong with Shang Yue (余文乐) at the Intercontinental hotel. It was her first single to be released in Japan and other country on the same day. This single reached #1 on the Oricon charts and charted for 11 weeks. It sold 166,203 copies, becoming the #39 single of 2007.

This single was her first to chart in United World Chart in more than 2 years. It failed to chart in the global chart of Hong Kong.