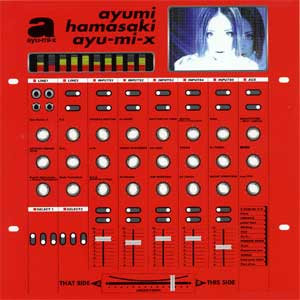 ayu-mi-x BOX SET is a special edition box of Ayumi Hamasaki's first 13 analog (vinyl) releases. The analogs contain remixes of tracks from the A Song for ×× album era. Many of these remixes were put on the ayu-mi-x remix album; many that didn't were placed on the reissued singles of March 2001.

Many tracks from this box set, including extended versions and instrumentals, are (as of April 2009) still only available on these analogs. Many extended versions are not labeled as such - one would have to note the track time on the label to notice that the track is different without listening.

The analogs are numbered to reflect the track order of the A Song for XX album, rather than the order in which they were originally released.

In addition to the 13 analogs (previously released in standalone form between June and July 1999, and now packaged with new sleeves & labels in the box set), the box also contains a phonestrap and a "postcard-style photobook" exclusive to this release.