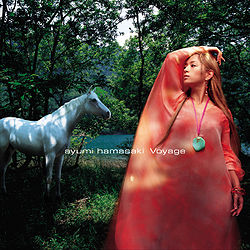 Voyage is Hamasaki Ayumi's 28th single. Voyage was used as the theme song for the movie Tsuki ni Shizumu and theme song for the TBS dorama My Little Chef. It was released on the same day as her remix album Cyber TRANCE presents ayu trance 2. It reached #1 on the Oricon charts and sold 628,730 copies in 2002, becoming the #9 single of the year. It charted for 21 weeks and sold a total of 679,463 copies. Voyage was performed at the annual Kouhaku Uta Gassen and won a Nippon Record Taisho award.

The music video for "Voyage" is made up of scenes from the short movie Tsuki ni Shizumu, starring Hamasaki.

It starts showing a young woman in a mental hospital, with doctors watching visions of her past life. In her past-life, she was to be sacrificed in a ritual, but her soulmate rescues her. They escape and run, but in the end they are caught and he is killed defending her. She is then sacrificed in the lake.

In the present day, she sees a visitor and she goes mad trying to reach him. In the end, they reunite in the present-day lake and realize they share a past life. The PV ends with them hugging each other. 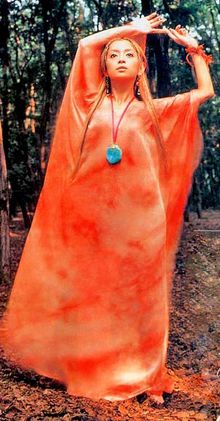