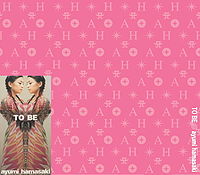 "TO BE" is the eighth single released by Hamasaki Ayumi. This is Hamasaki's last single to be released in 8cm CD version. The title track was used as the CM song for JT Peach Water drinks which featuring Hamasaki herself. The single reached #4 on the weekly charts and stayed on the charts for a total of fifteen weeks. The single also became the the #64 single of 1999. The single sold 109,860 copies during it's first weeks sales and it has since sold a total of 324,500 copies.

The single was re-released in 2001 on a 12cm format with extra remix songs. This time around the single reached #26 and charted for three weeks. 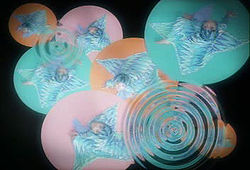 The music video for "TO BE" was directed by longtime collaborator Takeishi Wataru. It shows Hamasaki singing as seen by a little boy through a kaleidoscope. It makes use of various backgrounds, outfits, makeup, and wigs to bring as much color as possible into the world the little boy sees. At the end, the kaleidoscope lens breaks, and Hamasaki is seen in black and white.