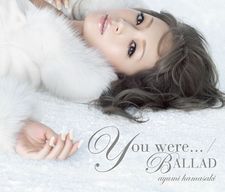 "BALLAD" is a ballad song recorded by Hamasaki Ayumi. The song is the second A-side on her 47th single You were... / BALLAD. It was used as the theme song for the NHK drama Soukyuu no Subaru.

There are two versions of "BALLAD" to be found on Hamasaki Ayumi's discography. These are: