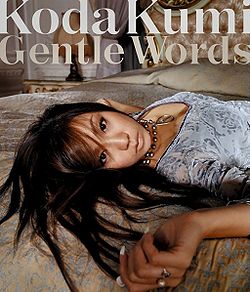 "Gentle Words" is the ninth single released by Koda Kumi. The main track was used as the Sato Healthcare's sinus gel "Stona" CM song. The single reached #15 on the Oricon charts and charted for 10 weeks. This single sold 9,531 units in it's first week and the most recent figures show that it has sold a total of 27,164 units.

The music video for "Gentle Words" was directed by Tadokoro Takashi of EXFLARE and produced by Fuku Kazutoshi of SEP.

It features Kuu as a nightclub singer, singing about a relationship that dissolved due to their respective dreams. Kuu drops a cracked mirror after looking into it, and another version of her watches on. As she comes to terms with the relationship, flower petals from a dream sequence float into the club. In another reality, Kuu walks away from the cracked mirror without breaking it, signifying her closure as the other Kuu looks on.

There are five versions of "Gentle Words" to be currently found in Koda Kumi's discography.